Greetings. This one is my first blog post about penetration testing. I encountered with this scenario on Hack The Box. This machine is currently active. Hence, I can’t tell its name.

Before we get started, I want to make some explanations.

While I was researching about manipulation of libraries, I saw that people were saying that this method looked like “DLL Hijacking”.

At First, we need to know the differences between module and library structures.

Module is a file which contains variables, functions etc. It is useful if you don’t want to put all classes in one file. Let’s assume that you created a folder named as test-project. Then, you created a.py and b.py files in it. Your project structure will look like this:

Then, you decided to call a function from b.py on a.py file. The __init__.py file is necessary for marking the directories on disk as Python package directories. If you try to put module b into subdirectory you supposed to append __init__.pt file to parent directory. Without that file, importing is going to fail. It means that for linking these files you have to append __init__.py file to your structure if you want to build a package from your project.

Now, a.py and b.py files turned into modules. We can call functions from a on b and vice versa. By the way, it is not necessary to add __init__.py file to this examples. Finally, you added example functions to both of them. 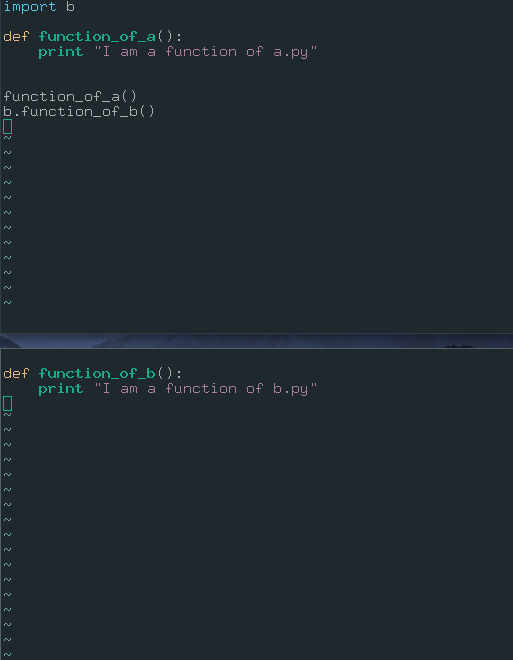 Here’s the output of a.py.

The scenario goes like this: Root user created a cronjob script for itself to easily manage the service logs. It works at every hour.

As you can see, interface.py created by root. Sadly, we can’t modify this file.

Okay, stop reading this post for a while. Just think about what we can do with this file for achieving root privileges.

It just seems like we can only execute it.

We are done with interface.py file. It is importing manage.py file. Time has come to analyze the manage.py module. 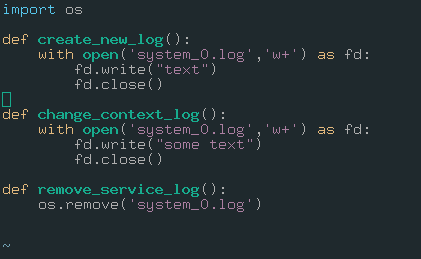 We are going to hijack manage.py module. The first possible injection point is functions of manage.py.

We can inject our malicious code into functions. I’m selecting the “change_context_log” functions. 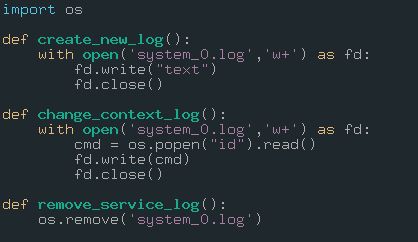 The second injection point is outside of functions. We know that import manage line gave access to pushing some code.

We need to inject this code to bottom of the manage module. Also, we have to write output to another file. According to code flow, injected code will run first, then functions will be executed. Hence, output file will be overwritten. 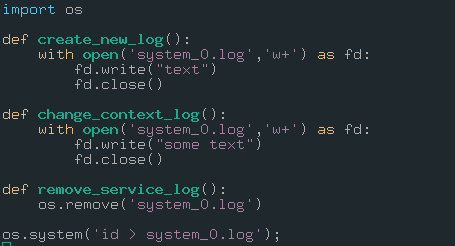 It will give same output with the last output.

What’s next? Okay, we know that this script is working as cronjob for root user. At every hour, our injected code will work with root privileges. So, we can run privileged commands. We can even gain root shell.

I changed the cron time to 2 minutes. After waiting, we got root shell.

I hope you understood how modules works. The difference between module and library is you don’t have to create __init__.py file for your project. Because, Python initializes these libraries on its own package directory. So, we can reach to these libraries even with “-c” parameter of Python. For example if you want to check UTC timestamp with Python on terminal, so you can call this script.

Also, if you want to check where are these package files are stored at, then you can run this script:

As you see, I used time and sys libraries in my examples. We continue with a similar scenario.

This time, attacker does not know what’s going on at the machine. At least he is in the machine. He wants to do process monitoring for analyzing the hidden processes. And he uses pspy tool.

After running the tool, he sees that a Python script is running on the machine at every two minutes.

The adventure begins as an attacker.

Okay, we see there is another cronjob running on our target machine. If we check cronjob list for current user, we can see there is no entry for user goku. It could mean that the running script could be root user’s cronjob.

Maybe, we should check this directory. There could be some juicy data. After checking this directory, we can see that there is nothing but Python script. We have no permission for appending anything to the script.

It means that root user learned his lesson from his mistakes. Surprisingly, it looks pretty secure. We should have a look inside this script.

Okay, it’s pretty funny. That developer might have tried something. But, he may have forgotten to remove this file.

Cool. We don’t have a module to hijack this time. What do we have? Correct! A library. Actually, libraries are modules too. But, the main difference between them is you can call libraries from anywhere.

After this process, user can call function from b module with this way:

But, we don’t need all of this. Because, we know that the developer has imported the os library in his code. As I said, we don’t have a module to hijack this time. Even so, we have a library. When you install Python libraries they are installed with 644 file permission. It means that only root user can make changes on these libraries. Other users can only read these files. Sometimes, people may give wrong permissions to Python library folders.

If so, we should check library folders.

Bingo! We have permission to write into os.py file. Pathetic, right? At least, “dumb” developer has gave wrong permission to only one library. We are going to turn it into a weapon.

To show this example, I will write the output to a text file.

So, we appended our malicious code to bottom of the os.py file.

We set our trap and we are waiting for cronjob. If our assumptions are correct, everything will be fine. The malicious code will execute id command and it will append the output to /tmp/id_out.txt file.

After waiting a little, we achieved to execute command as root.

In this part, we benefited from running cronjob for obtaining root privileges. This scenario is more dangeroues than “module hijacking” scenario. Because each time you call the os module the injected code will be executed. Possibility of calling the os module is higher than calling the b module. Even root user may call it.